Sushi Movie Reviews
one girl. many movies. all reviews, all the time.
the matrix revolutions

initial reaction to the third and final installment of the matrix movie: the feelings of a small child who has stubbed her toe and dropped her ice cream. which translate to angry sobbing and crushing disappointment. i just walked into my brother's room as he is planning on seeing it tomorrow. and i just looked at him a while--in defeat knowing he would see it anyway and a sense of resentment for this 24 additional hours of purity he's still got left.

what happened to this trilogy? what happened? why didn't they just let it stop at the first one if this is what they're going to put us thru? when i saw the matrix for the very first time i walked into the parking lot a new girl. it completely rearranged my head and the way i thought. i loved it so much i didn't even have words. the second one came out and i was duly impressed, but not joyous. not overwhelmed. and now this. this which just makes me want to scream out, "WHY?! WHY?!" underwhelmed is a serious understatement. ("i know you can be overwhelmed and underwhelmed. but can you ever just be whelmed?" you know it's bad when i'm quoting 10 things i hate about you rather than discuss it.)

what is good about this movie? almost nothing. the very end of neo and agent smith's fight i will give due credit to. well not their fighting so much as the whole clever deletion aspect. it's sad when the other good part about a movie is the machines. the only other thing which i thought was really good was the sentinels in the dock. they fucking stole this movie. which wasn't hard with such abysmal acting and writing to contend with. metal calamari with no vocal cords kind of had an unfair advantage in that respect.

uuuurrrrrgghhh anyway whatever. i'm going to stop thinking about it now. maybe i'll even try to see it again. i could like it better next time...i'm sure. it's just so hard to accept that the incredible innovation and creativity that went into the first one has lost so much lustre and become my dirty dropped ice cream cone.

this is my one-hundredth movie review on this page. none too shabby.

the jury which runs away with you! i would run anywhere with a jury made up of john cusack and rachel weisz. so yeah this movie is a john grisham book/movie which makes it not so great. but cusack, weisz, and dustin hoffman definitely make it work for me. sigh. such cuties. hoffman has some appeal. i wouldn't sleep with him but i would run away with him. he's so wacky. nuala had a harder time seeing his appeal. but nuts to her. the plot wasn't bad, even at times clever. and they all did a great job acting. i really saw this a long time ago and was slow on the review uptake so that's pretty much all i have to say.

Posted by michele at 08:30 PM
the station agent

fucking amazing. honestly. such a great idea and really intelligent writing with the pathos and the serious and the comic. sigh. so good. i am completely in love.

all right, now that i've said how much i loved it i want to confess how hard i find it to write about this movie without going straight to hell. because, what is this movie about? it's about a midget. only, not a midget, ok? a "dwarf". and he works on toy trains in the city (hoboken! jason! see this movie!) and then he moves to the country (although what part of new jersey is not the country? come on. new jersey. garden state. i did a report in 6th grade, i'll have you know.) and he lives in an abandoned train depot that he inherited. makes all sorts of friends. great friends. great. and that's pretty much it.

but see he's a dwarf so there's all this dwarf slander and ill will and staring. and who does that? jesus. i feel no need to stare at dwarfs. they're not that exciting. fascination aside, i've really never had a point to my obsession of involving them in every game of balderdash. it's not a real obsession. it's one of those fake ones. i'm just a big fat faker. heh. but now i've got to consider the point of sex with a dwarf because of course they bring it up. and it's fascinating.

fin and joe are sitting on top of the train in the yard talking, ok? and it goes a little something like this:

this is both titillating and sad. on the one hand it brings up the whole question of, what is THAT like? and would it count for a couple's exotic sex pact? but then also the fact that fin either had sex with another dwarf and it was bad or has never had sex with a woman his size and was upset by that. i don't know. i don't know what it was but it was kind of terrible.

the movie on the whole though is just really, really sweet. the three main characters of fin--the taciturn dwarf, joe--the loud-mouthed heart of gold traveling food cart vendor (even if at times from a distance he resembled vin diesel to me, i still love him), and olivia--the distressed middle age woman were just all PERFECT. they build a friendship and become family. plus they're funny. this movie had some incredibly funny lines. made even more funny by deadpan delivery and the quiet lead-up. i'm trying to think now of some of said lines, but out of context they're really not as funny. package deal! see the package! i highly recommend this movie. it's good good good! 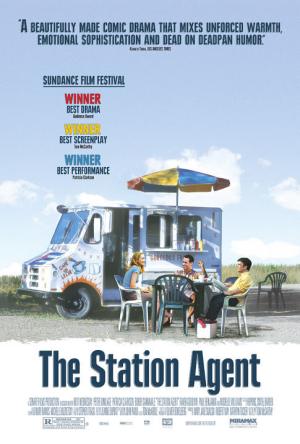