Sushi Movie Reviews
one girl. many movies. all reviews, all the time.
school of rock

jack black rocks. ok, this movie is beyond childish but it's really quite good. i mean, sure jack black's character 'dewey finn' is a bit of an ass, but the kids are so fucking adorable. and the whole concept is so great. plus it's rocking.

story: jb gets kicked out of his band and has no money while his roommate, a substitute teacher, is demanding the rent. he takes a call for said roomie and pretends to be him to get a subbing job at a prestigious private school. there he finds out the kids are all classically trained on various instruments and he sets up the classroom to teach them about rock n roll. in order to get back at his bandmates who kicked him out he enters himself and the kids in the "battle of the bands" contest. blah blah blobbity blah

so many moments in this movie are just pure funny. i was giggling pretty much the whole time. admittedly, not many people that i know would appreciate this movie, but it is basically appealing to all ages and keeps jack black within circumscribed limits so that it can remain good wholesome fun.

the best part about this movie is definitely the kids. they are amazing. and soooo funny. there's one, who jack black calls 'fancy pants', who is the token gay kid. he is fucking sweet. he gets to be the band's 'stylist', although no one agrees with his flashy glitter rock style. he also calls jack black 'tacky', which was a wonderful moment for all concerned. then there's the lead guitarist who is incredibly talented and also very silly when learning how to properly make facial expressions while strumming. summer, the band's manager, is this anal retentive little girl who is completely bossy but still adorable and has the brilliant idea which gets them into the 'battle of the bands' (they all pretend to be terminally ill). freddy, the drummer, even lies down on the ground because that is how dedicated he is to faking illness, and boy howdy is he ever serious about being punk. the singers have lovely voices, the groupies tart themselves up nicely and take 'adoring the band' very seriously.

with so many people in the movie and all the kids being together with jack black in almost every scene, it was hard for things to be distinguished. but the director gives you time to take in everything that is going on in the foreground, background, left, right. which is good. since it gives one time to fully appreciate what everyone is doing while taking it all in as a whole. there's usually little absurd things going on in pockets which are great fun to catch.

joan cusack as the principal is an inspired choice. jack black is greatly asinine. and the kids steal the show. plus their song is catchy. 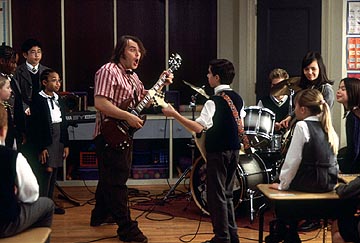 i was going to post a snide comment, but then i remembered how we just watched 11 episodes of angel in a row and then i was quiet.

yeah now whenever you make snide remarks about things, i'll know that within 5 years you'll be a sworn defender to the death of them. don't even bother trying to come back with something here. because it's all just empty protestations, and you know it. =P

hey great movie review michele!
a really funny jack black :)
have you seen "orange county" with jack black? if not, you have to see it! ;)
greets from germany

i in fact own orange county. i love the special feature english class deleted scenes. =)