Sushi Movie Reviews
one girl. many movies. all reviews, all the time.
once upon a time in mexico 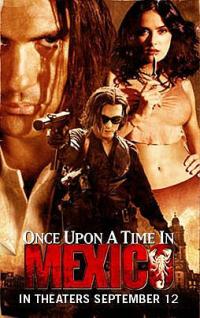 i love sneaking into movies. so free! and exhilarating.

i expected this movie to be better after the praise my brother heaped on it. but it was kind of a let down.

once upon a time in mexico is a sequel to desperado, which itself followed el mariachi (which had different actors). i wish i could give a plot synopsis of ouatim, but sadly there was none. if anything the story was, "mexico is not as weak as you think. fuck off and let us handle our own problems." seriously. this movie had, as far as i could tell, almost NOTHING to do with the previous one.

they followed some of the same conventions in pacing and story telling. ie at the beginning someone walks into a bar and hears a story about the legend myth man of EL mariachi. but then this one just went all to pieces with too many plot elements to follow, too much double crossing, and too much 'revenge'. and whose fault can all these problems be laid at the feet of? johnny depp. his character was trying to mastermind this whole coup to stop a coup to have his own coup, that everything became mushy like pea soup. and similarly opaque.

on the other hand, johnny depp was brilliant as ever. and even said, "savvy" which he says all the time in pirates of the carribean. ahhhh the man really only plays one role. and he does it so well.

antonio banderas just goes around shooting things and being all noble. people who died in desperado are alive and well. a new bad guy has popped up and has a past with selma hayek's character. completely out of the blue. she herself is hardly in this movie. it was all kind of flighty.

plus enrique iglesias is in this movie. he's a son of mexico you know.

some good lines by depp. "are you a mexiCAN or a mexiCAN'T?" that's really more racist than good. "fuck you." "fuck off." i like it when he swears. the whole movie he just speaks in english to all these mexicans and then tells them to fuck off. the first time he speaks any spanish is to say "no se" (spelling?) which i felt was ironic. in a good way.

in conclusion, this movie is a piece of mexican propaganda (the three mariachis save the day under the auspices of being "sons of mexico" and the fading images at movie's end are of banderas kissing a sash of the flag.) canned politics was an interesting direction to take an action sequel. but apparently robert rodriguez (the man behind the spy kids franchise [1, 2, and 3]) had something to say and he was going to cram it in come hell or high water.

No no, one of the best lines was when he buys the chicklets from the kids and he says, "This is $10, this should last you and me a very long time. Now fuck off." I also enjoyed when he was on the phone and he said, "Can you hear me now?"

sigh. I love you Johnny Depp

hee! those were good lines. his whole interaction with the chiclet kid was good. see though, it's when he goes around telling people to fuck off that i really love him.

I thought The movie was very good. Johnny Depp and Banderas were amazing. I really enjoy when El Mariachi plays his guitar, the music is so amazing.