Sushi Movie Reviews
one girl. many movies. all reviews, all the time.
kill bill: volume 1

in case anyone was considering whether or not to see this movie and remained undecided, let me clear up your dilemna. get your ass in gear and go see it. holy fuck it is amazing. the cinematography, the fight scenes, the acting, the variety of film styles used, the music, oh man. it is unbelievable. it is so good. i can't even talk about it. all i can do is recommend the seeing of it and the railing over the fact that volume 2 doesn't come out till february.

things which were amazing:
the animation sequence (particularly "whimper")
the fight between the bride and the yakuza (the blood! the switch to b/w!)
lucy liu
uma thurman
the beginning
the cliffhangy end
the editing
the obvious planning and forethought which went into each section/chapter 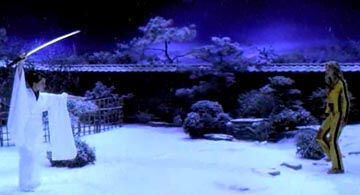 Holy Christ, I'm so glad the movie is good. I really was hoping it would be and was really expecting it not to be. I will go to this movie, and my popcorn will be buttered on both sides.

i would go see it again, jason! i'll come to the city and see it with you!

Yey! We'll discuss the details at the party.

Yeah, it was bitchin.

I knew you'd be all over that Anime bit, and the "whimper" was awesome. I really want to see the next part.

I'm so glad you wrote a review of this film, because I was gonna if you didn't. It was so funny and stylish and bloody! Good stuff...
But, we have to wait til february???

you should write a review anyway! i do not want to be the reason people don't write movie reviews too.

i know, february! bitches and hos.

when is this movie watching taking place? i want to see it!! if you want to go later this week, i will be done with my masses of paper writing after wednesday.

I can be a man of action on Thursday or Wednesday evening, the closer to eight or later is best for me. Who's with me! Can I get a hoot and a holler!

Whoops, I can't go on Wednesday.

i can't go wednesday either, but i can go thursday.

Michele - I just saw previews for a film called "demonlover". Have you heard of it? It looks awesome and right up your alley.

i never heard of it but i will go look it up on imdb right away. thanks robyn!

HA! HA HA! Michele, your blog spam is much less exciting than everyone else's. Don't you wish you allowed HTML on these comments?

the movie to me represents vengence in the style of the old fashioned samurai. i was pleased to see that the almost all female cast was able to show grace,dignity,cool moves,
and a story that will touch your soul. if you cannot watch this movie without regards to vengence with a passion, you won't enjoy this movie. to enjoy it takes more than just saying that the women were kickass. you must think about all the factors the movie represents .to me this movie is one of QT's best movies and i can't wait till volume two comes out