magdalene sisters" />
Sushi Movie Reviews
one girl. many movies. all reviews, all the time.
underworld

i just went and saw underworld, and damn but that movie is sick. it has everything a girl could want. vampires, lycanthropes, guns, semi-impressive new technology for fighting the above species, love. AND an exciting and unexpected ending! well, not the whole ending. but the little twist at the end. that was good.

so this movie is about selene (played by kate beckinsale, who has come a long way from her days playing hero in much ado about nothing, you've got to admit), and selene is a vampire whose family was killed by lycanthropes and she was rescued by this old pure-born vampire named viktor who took her in. and she stumbles upon this lycanthrope plot to make a special new weapon out of scott speedman (from felicity. ha ha. but no, seriously, he's not bad in this) playing michael corvin. so the movie follows this war which has been waging between vampires and lycans for 1000 years and thru exciting flashbacks and carefully revealed info we learn the cause of the war, the truth about selene and michael's respective pasts, and the future of the vampire/lycan conflict.

in between the whole movie is this dark imbued cinematography. i don't think they once filmed during the day, they all wear dark colors, so generally the only light things were the moon and the vampire's glowing blue eyeballs when they change.

the fight scenes are not really rave worthy, but they're not bad. since it's almost all done with guns, it's fairly typical choreographing with the added benefit of a few jumps from very high up, and half the opposing forces turning into big ugly werewolves sometimes. but kate beckinsale wanders around encased in tight black leather all the time, and there's nothing wrong with that.

so, if you're a fan of the laurell k hamilton books or buffy, i strongly recommend this movie. it's fucking sweet. if you're against supernatural/occult films then you can go see the fighting temptations. 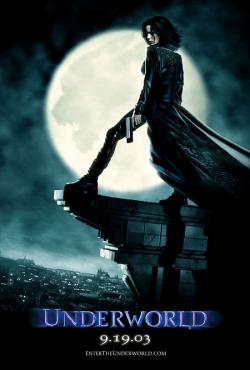 so i just went and saw underworld a second time with none other than the webmaster himself.

#1 why are there only MALE werewolves. first off: sexist. 2nd: in this one flashback there is a female werewolf. were they all killed off or do they seperate the women for protection? and if the latter is true: sexist!

#2 selene should have died several times within the first 10 minutes of the movie. she is constantly not protecting her back and becoming distracted by slight sounds. it's pathetic. she is the worst warrior ever.

#3 werewolves are allergic to silver. i noticed in michael's mouth there are silver cavity fillings. does this pose a problem?

#4 the infectious venom is in the biter's mouth. (apparently. in this version of vampire land) how does this effect the fact that lucien spits blood he has just been drinking from michael into a vial which they later do a blood analysis on? the test should be invalidated, i'm sure it's contaminated.

#5 gene made the point that a lot of modern vampire movies are concerned with making a meta-vampire. does anyone else have thoughts on this?

I saw this movie the other night ... and was rather disappointed overall (so were all 3 folks i went with). The movie seemed to cram a massive, yet pretty contrived, plot into a what coulda been a good goth/industrial romp. the whole thing kinda just stuttered along, at least for me. There was admittedly some cool stuff, some very rad looking clothes/fight scenes, but overall i ended up feeling that it should either make it more thoughtful plot-wise or they should just drop 1/3 of that plot and run with the fact that it looked cool.

The movie did, however, make me ponder this: why are there never any 'plus size' vampires? I have never seen a large/bigboned/healthily voluptuous vampire in recent days, (except the gross thing in Blade, but he is a freakish anomaly). Someone said 'well maybe the vampires only choose healthy and/or pretty people to turn into vampires' Uh, man there are some DAMN ugly vampires in the movies, they are gross and gaunt and weasel-faced and have all kinds of bad physical attributes. But never extra fat.

Underworld seemed to try for the racial diversity a leeeetle tiny bit (ooh there was one asian immortal!) but the lack of female werewolves (is it the idea of girls having a lot of hair and growling?) and non-scrawny vamps is my current pet peeve.

I also noticed the lack of non female werewolves and after reading Anita Blake I also disliked how all the werewolves were dirty, and scragly looking but maybe they were trying to convey that whole they were slaves vibe.

Where was the female werewolf? Where? Wasn't the girl in the flashbacks a vampire?

As to Michaels silver fillings, 1st how the hell do you notice these things and second he did have the special blood thing and we never really saw how special boy reacting to being just a plain vampire really.

As to vampires being all pretty, even in the Anne Rice universe they pick pretty/amazing looking people to make into vampires. It seems to be a common theme that they DO pick beautiful people, or that becoming a vampire makes them even more beautiful than they were. Even in Anitaverse it's only the old ones that are ugly, and even most of them are pretty.

I expected them to be pretty and would have been damn disappointed if they hadn't been.

maybe there's a correlation between an all iron diet and thin-ness. i don't know how and it sounds implausible but...maybe we should test it and see. i will start. if it helps, there was a chubby plus size girl vampire in an episode of buffy i watched recently (season 4, 'freshman') (i am pathetic)

nuala- the werewolf girl is behind the bars in the flashback scene. the one tied to the post is a vampire, yes. but behind what's his name there's a caged off section of the room and there's werewolves back there screaming, "no no stop!" and there's a long haired dress wearing person who i'm pretty sure was female.

why is there only boy werewolves....
any way cool i bought the movie not to long ago.

thanks for recommending it.