drumline" /> gangs of new york" />
Sushi Movie Reviews
one girl. many movies. all reviews, all the time.
the dangerous lives of alter boys

I just wrote this huge thing for this movie and now its fucking lost it. argh!

so. dangerous lives of alter boys. i was expecting it to be bad, because marina said it was awful. but it's actually quite good. and even though they don't exactly follow the book, they hold true to the spirit of it and with the added inclusion of animated scenes by todd mcfarlane (blade/spawn guy), it's actually rather impressive. and kieren culkin who i had written off as a shit child actor culkin can actually act. and do it well. and i found myself *liking* him. amazing. wonders. never ceasing. you get the picture.

for those of you who have not read the book/seen the movie. short plot with differences highlighted:

the movie follows the lives of 4 (5 in the book) catholic school boys (i'd say 10th grade maybe?) who are aspiring comic bok artists. and they make the comic which has lots of despicable things being done to the nun teachers, as well as lots of naked pretty girls. and themselves in their alter ego superhero characters (brakken, the muscle, major screw, and ass kicker.) 2 of the boys are really kind of superflous, as the story mainly centers aroung francis and tim. francis is in love with margie flynn. and tim kind of seems to be occasionally in love with francis. but anyway, it's about them growing up and pulling crazy pranks, and drinking, and having rather horrible home lives (francis' is much worse in the book as his father is constantly beating him. but tim's is bad only in the movie as his parents are constantly screaming at one another. and he's a very troubled teen because of it--which was true anyway, but mostly because of his over-educated status, the son of a university history professor who doesn't seem to believe in god. but does believe in william blake.) they are mainly tyrannized over by sister assumpta, (played by jodie foster) who has a prosthetic leg. so they decide to capture this mountain lion from the wild animal habitat and release it in school to scare peg-leg and to get out of classes. in the meantime, shit is hitting the fan between francis and tim because of the girlfriend of francis and because of tim's home life and whatnot. and we learn some disturbing things about margie and her brother. but the boys all come back together and go to get the cougar and during the rather ill-planned capture tim gets savaged by a second one and dies. and that's the end of the book and the movie. 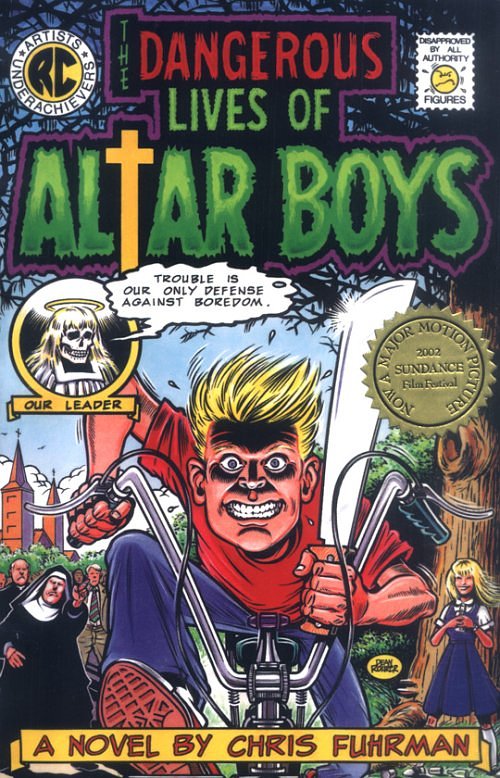 the truly inspired thing, in my opinion, was the animated sequences featuring the boy's alter egos trying to rescue the kingdom of sorcerella (voiced by margie) from the evil peg leg. the action in the live and animated versions mesh perfectly and the interspersed animation provides a poignant counterpart to what is going on in the "real" lives of the boys. plus, as i said, the artwork is pretty damn great.

this movie is out on video now and i highly recommend the rental of it.

the book is by chriss fuhrman, and can be found here at amazon. 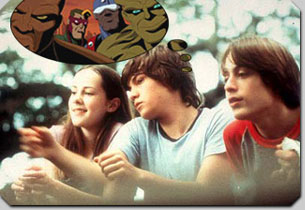 I thought the movie was incoherent, poorly written, and featured inferior and extraneous animation. It was also boring.

I thought the movie was awesome. Even if it was a low budget movie, it was funny and at parts sad. I liked how it revealed the "evil" in the aparently good hearted characters to show you that not all of us are perfect. Oh ya, and it was not boring, the animated parts gave the movie a bit of a twist on the fantasy lives of the alter boys.

I thought this movie was the best movie iv ever whatched and it touched me so much! when that mountain lion grabbed tim i felt it. and when i found out tim died, it was like i lot my best friend....that movie was so real to me.

I really enjoyed this movie. Every scene pulls me more and more into the story, and makes me more and more interested in the lives of the characters. I found nothing boring about it. At first, the animation seemed cheesy and not appropriate, however, as I saw it more and more i realized what a perfect idea it was to convey what was going on in the minds of the boys, and just much it added to the movie. All the characters were fantastically portraited, especially Tim, Francis, and Margie. These three did a fantastic job of showing the confusion that goes on in the minds of early teenagers, and really shows the seriousness that some kids go through, (Being exposed to evil, if you will) Overall, it was a great movie, one that i can watch over and over.

ryan, have you read the book? because if you liked the movie that much i really recommend the book.

I really liked it. As of now I haven't read the book, but I want to. I heard the book was much more dirty and darker. Is that true?

it is a lot darker. the family relationships are a bit more intense for the main boys. and for the girl. and then the sexual elements were downplayed some in the movie i thought, whereas the books expounds on it more.

I loved this movie...it was just one of those movies that I didn't really want to end. I gotta say it's a truly spirited film that just tells how life is sometimes. Of course the little comic scences that followed the story was just pure genius. Although it surprised me being darker than I had expected it to be...I thought it was an awesome film, maybe even perfect. Highly Recommanded!*****

OMG!! I LOVED IT!! i fell in love with the movie the first time I watched it, now i have to watch it over n over again! the actors bring in the personality extreamly well. THIS MOVIE WAS GENIOUS! And if I could I would but 100 copies of it and watch it over and over and never stop! This movie was absolutley PERFECT! this proves to show that there is such thing as perfect! and the way Tim and Francis r such great but strange friends is amazing! The way they make up soo easily! I HIGHLY HIGHLY RECOMMEND this movie to ALL!

Although the movie left out several key scenes (Francis being abused by his father, the duck scene, Francis and Margie getting really dirty, etc)it came through alright, the opening sequence was not in the book, but it was needed to show the charecteristics of Tim and Francis. I did like the book better, but I do reccomend this movie to anyone who likes coming-of-age films. The book will go deeper into the lives of Tim and Francis and will be alot darker and less histarical then the movie was, almost goth-like, in a good way.