Sushi Movie Reviews
one girl. many movies. all reviews, all the time.
drumline

going on the fact that most of you probably have no idea what the hell this movie is about, i am first going to give a short plot synopsis. and then some pictures. and then a very short review involving a lot of laughing.

there's this black kid (nick cannon) who plays the snare drum and he's good but doesn't follow orders well. he gets a full ride to some college. where he plays the drum well but doesn't follow orders. then it comes out that he can't read sheet music and he gets kicked off the marching band. orlando jones has a lot to say about "musicianship." the girlfriend (zoe saldana) seems to see something in the kid that i really didn't. then thru hard work and the help of the guy who ratted him out and some tapes from his estranged father, he writes some damn fine music and practices writing music and then gets back on orlando's good side, though not back in the band. and they play his music at the annual hug marching band competition and then there's a drumline showdown which he does get to play in. and that's the end. 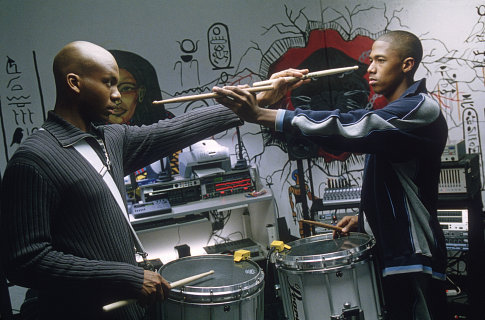 soooooo much time watching marching bands. so confused as to why pretty girl is interested in cocky, younger, smarmy guy. but some of the music is good. and basically if you can suspend your awareness that you're watching a movie about marching band tribulations with some poor acting and horrible writing which harps on "musicianship" it's pretty entertaining. also as a culture facet it's fantastic. who knew people were so into marching while playing instruments? who knew they had drumline showdowns? who knew there were sexy dance routines that went along with the music? mostly though it was amusing that i watched this and like mike with marina while she was here and i had watched how high another time i was with her last, and we think it's now a trend that we have to watch at least one really bad black comedy when we get together. 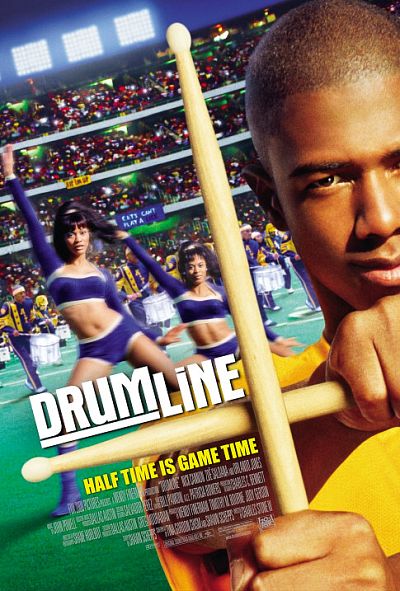 i think that that movie Drumline was a good movie to watch. Also because nick cannon was in that movie it was also interesting to see. this is a movie i would recamend for someone else to watch if they wanted to see some real action!

I wish i had some of the sheet music from drumline for my highschool marching band it would help alot i need the school to start dancing to the marching bands music not BOOING...lol......if someone could send me some that would be most appreiciated!!!

i love this show!!its probali the best show i have ever seen!!thats cuz nick and zoe r together!i realli hope to see more of them acting...