Sushi Movie Reviews
one girl. many movies. all reviews, all the time.
the italian job

first off, let me say that it is truly absurd how obsessed i am with seth green. that said:

this movie was pretty fucking sweet in my seth green obsessed opinion. he had good lines, a cute smile, grungy cute clothes, the longest eyelashes ever, and a made up dialogue by himself impersonating handsome rob hitting on becky. sexy fucking little bastard.

the car chase scenes were fun. the speeding little mini's were sweet. marky mark was good, jason statham was handsome, mos def was adorable, and charlize theron plays vulnerable sex appeal to perfection. on the flip side there was edward norton who is not a very convincing villain and had hideous facial hair. i still love him, but jesus that goatee was awful.

it wasn't suspenseful or scary, but it was an enjoyable time and is good on the big screen. plus some beautiful shots in venice if you're missing the good old days in europe. 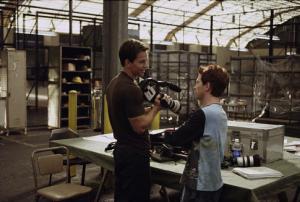 (just look at that adorability. ahhhh.)

Posted by michele at 11:16 AM
down with love

note: i think it's important and i forgot to include it initally, but this movie is directed by peyton reed, the same man who directed 'BRING IT ON.' i think that should be a little telling.

if only i could watch ewan mcgregor stride around in those clothes with that smile for 2 hours and be completely content my life would be so much easier. however the plot, writing, and acting of renee zellweger threw me off and into a distaste for this movie.

it's in the way she walks with the ass swung as far as possible to each side with every step. in the way she holds her hands up like a small squirrel will begging for food. in the way she talks with that irritating high pitched lilt. i just cannot bring myself to like her. except when she's got some weight on her bones and is playing bridget jones'. and even then it's all mostly about the colin firth.

there's this great plot twist in the movie. i won't give it away. but it almost ALMOST makes up for the sheer trite tripe of the rest of the movie. for like 30 seconds after it's revealed i sat there dumb and gaping going, 'well hell, this movie is practically a jeweled gem all of a sudden!' but then it slid back into another 20 minutes or so of stupidity and i lost my affection for it again.

the fact that they were trying SO HARD to make a cart grant old skool type romantic comedy but in color and without the innocence of those days was just lame. the scene where ewan and renee are on the phone and are simulating sex with the split screen shots was funny, don't get me wrong, but also just too contrived.

ewan was great. david hyde pierce was hell of funny, brilliant comic genius of a man. but on the whole down with love (about which i was very excited) was rather a disappointment. due to the complete lack of special effects or big screen budget, i would recommend rental over paying full admission price.

good lord, do you think that's his wife? she's adorable! 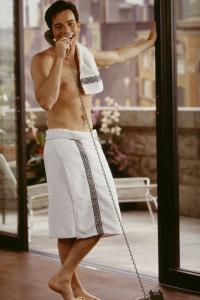