Sushi Movie Reviews
one girl. many movies. all reviews, all the time.
la boheme

admittedly la boheme is an opera and not a movie, but since it's baz luhrmann's production and he is somewhat of a movie guy i am cheating and posting what i thought of it here.

it's gorgeous. i can't even begin to describe how incredible the sets are. they are so amazing it's scary. it's basically as if you were sitting on the sound stage of moulin rouge and watching them build paris in front of you. they have these huge transferred photo backdrops, three story buildings, larger than life signs and constructions. and it's all on this tiny little stage at the curran theatre on geary street in san francisco.

for those of you who don't know, the opera is merely opening here in san francisco for a preliminary run before moving straight to broadway in november. if you want to read the san francisco chronicle's review, go here.

the singing, the acting, the cast were all great but really it was the elaborate, while still attuned to the smallest detail, staging and set design that really struck me about this theatrical experience. although going out to dinner with one of the ensemble members and hearing lots of backstage dirt on the production was pretty fucking sweet too.

so although i would love to say, hey peeps go see this. i really don't feel i will because i spent $90 on a ticket and i know there is no fucking way any of you who read this would ever spend that much to see an opera. but it was incredible and i at least am so glad i got the oppurtunity not only to go, but also to have some of the best seats in the house thanks to mansard connections. (go ady!) 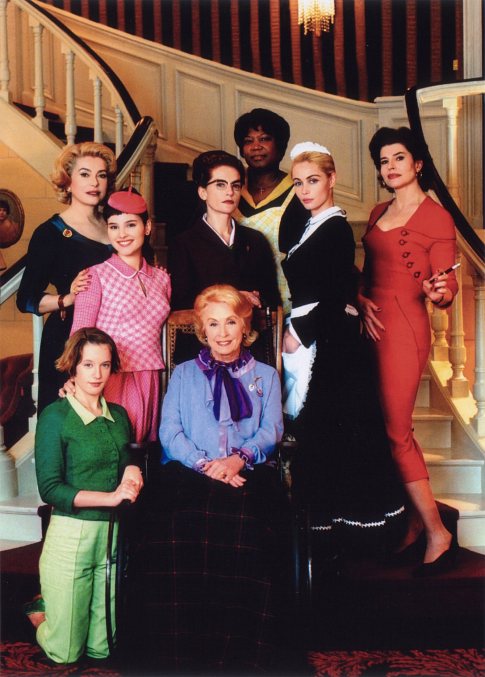 On Sunday I took my mom to see the french movie 8 Women at the Dome (not in the Dome, mind you, because of course my fucking big cock fat ass greek stoopid wedding is back in the dome.) Imagine my surprise when the movie turned out to have musical numbers. color me shockfaced. it was a fjords revelation, i'm telling you.

the movie was good. intrigue, 8 female characters and pretty much nothing else, lots of lesbians on the sly, fake settings, fucking song and dance numbers, (i mean come on it doesn't get much better than emmanualle beart singing about how she lives her life up or down taking chances and seductive swinging and ludivine with virginie and catherine deneuve singing backup on how her father doesn't know everything. poppy number...pop pop poppy pa pa pa. pa pa pa. mon pere, mon dieu!)

It's in french with subtitles, of course. and the pacing is kind of slow. but some of the shots are fantastic, the plot is convulted and only a little hole-y. the twist is good though a little expected. one of the revelations is wholly unecessary and completely undealt with. but whatever. actually more than one of them. hmm.... still an intertesting movie based mainly on the casting and playing of all female leads and the setting in basically one room of one house and the inability to leave (due to snow. but also to feminine trapped syndrome.)

my advice: video is nice. make sure you watch it in widescreen though. spending $8 though is probably not necessary.

Posted by michele at 01:01 PM
Spirited Away 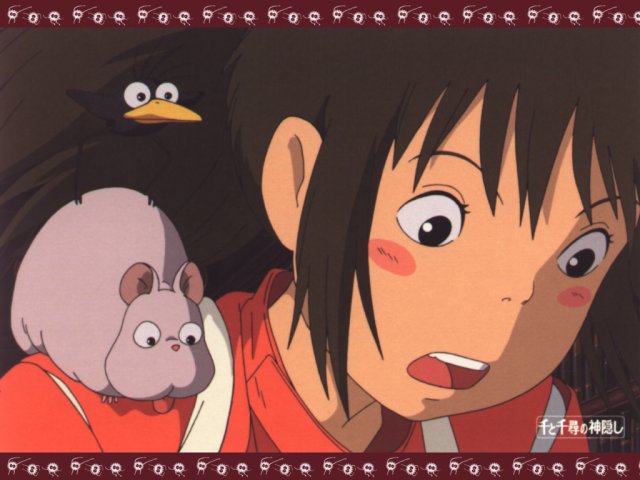 Spirited Away is an incredible masterpiece of a movie. The art, direction, cinematography, and animation quality were intensely good. Even the dubbing was fantastic, and I very seldom like dubbing.

"excuse me....i think maybe you've forgotten me back here. could i have some water? it's very cramped. I can't see or feel my toes. Have you seen them? maybe could we move some of these boxes? i think i'm allergic to flowers. is anybody up there? excuse me?....."

Chihiro is a very whiny child. Just like the one in the actual car on the actual I-5 so long ago. And she's bratty. But over the course of the movie she starts to grow up and take responsibility for herself and to save her parents. Even there are some semi-frightening scenes in this movie, it is still one whose target audience is actually children. Miyazaki said in an interview about SA that he wanted children to learn through watching one little girl who is left alone in a scary place and how she counters her own fear and makes new friends. And even finds love with a gorgeous fun water dragon. (laughs. Ah Michele and her incessant and improbable love of anime boys.)

There are so many really good parts to this movie and I don't really want to give away any more than I have because I think everybody should see this movie.

THIS MEANS YOU, UNCLE SAM.

It's even better than Princess Mononoke. It's like a cross between the scary/mystical of PM and the cutesy of My Neighbor Totoro. But most of all it's just a wonderful, wonderful movie. And it's currently playing in the Dome. So go, go, GO!