Sushi Movie Reviews
one girl. many movies. all reviews, all the time.
blue crush

surf lingo! hee hee hee! who are they kidding? this movie was awful. it was so awful. i can't even describe how awful it was. if only i could get my hands on a copy of the script....well all thier talk of 'killer waves,' 'awesome pipes,' and 'bliggity blob flog bob' aside. the plot! holy shit. let me paraphrase a scene for you of the budding romance between the surfer chick and the football jock from the mainland.

BWAHAHAHAHA!! it is even more priceless when you consider the fact that they've known each other less than a week. and she already is dumping all of our emotional bullshit on him instead of talking to her best friends.

anyway this movie was horrid. you say you heard good reviews? ignore them. trust me on this. whatever you do, do not spent 8.75 on this movie. you could maybe rent it. or watch it when someone else rents it. (a la dustin and titanic). which is not to say that i am not glad that i saw it. cause i did really want to see it. but i think i had more fun laughing at it then actually enjoying it. mmmm but the bikinis were nice..... 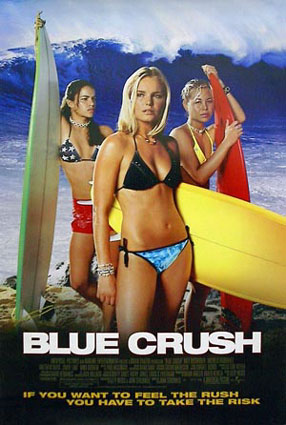