Sushi Movie Reviews
one girl. many movies. all reviews, all the time.
linda linda linda

i just got back from seeing 'linda linda linda' at the kabuki in SF as part of the asian american film festival. this movie is about a high school girl band that is preparing for the school festival. there's love and betrayal and really not any betrayal, but you know, high school mini dramas. it's pretty adorable. it's also really interesting just as a very plain and simple look at the everyday (or at least 'everyday' for an all girl high school band in japan) lives of japanese teenagers. they go to the grocery store, the take the bus, boys tell them they love them in the equipment room, they make udon (not bukkake), they take baths--or at least this is inferred from the wet hair and towels around the shoulders. there's certainly no nudity. it's really a very innocent movie.

the thing i liked best about it was the way that emotions came across really clearly. my favorite scene occurs when the girls go across town to a studio to rehearse and the ex-boyfriend of one of them works there. the korean girl in the band who is slightly gauche and doesn't speak/understand much japanese asks the guy if he's the ex-boyfriend. there's like waves of embarrasment rolling off the girlfriend at this point and you totally feel them out in the audience. you can see the girl at the drum set just shaking with inaudible laughter too. it's brilliantly funny while being nerve-wrackingly awkward.

the story is also really interesting from a socio-political standpoint as one of the main characters is a korean exchange student at a japanese high school. the story is about her joining the band and being the vocalist and sort of learning japanese that way and gaining acceptance in the high school. of course, her korean-ness provides some interesting hilarity of miscommunication throughout the movie, but it also displays the current trend in japan to idolize korean culture. to understand this it helps if you know that during the war japan treated korea like its bitch and since the war they've basically ignored or looked down upon korea. but in recent years the younger generations have become korea-crazy and are just scarfing down the pop-stars and k-dramas (soap operas). there was this huge controversy, i think last year, over a japanese soap star kissing a korean soap star on some drama. and the two countries hosted the world cup together which didn't go swimmingly but, still, it was one more step towards a sort of semi-acceptance of each other's cultures.

my favorite korean thing about this movie is that during the festival the korean girl was in charge of a 'booth' at the festival highlighting japanese-korean cooperation. this entailed making a huge construction paper cow on the wall and labelling his various body parts. it was called 'beef darts' and the participants at the booth were given some darts to throw at the cow. the korean girl would then do this little clapping thing and name the body part in korean (on the cow there was the korean and japanese names for everything side by side). i made a little video to share this scene with all of you. and if you've read this far than you really deserve to watch the video and laugh at me.

you can buy the soundtrack to the movie! tempting! stupid linda song is still totally stuck in my head. (especially since candy just sent me the mp3 of the original by the blue hearts.) linda linda! linda linda lindaaaaaaaa! 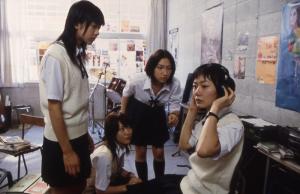