Sushi Movie Reviews
one girl. many movies. all reviews, all the time.
how to deal

for those of you not so well versed in the current youth oriented mindless tripe, let me give you a little background on this movie.

mandy moore is a pop singer. for some reason she is now acting in movies. in her first movie, a walk to remember, she played a girl who's dying. but who can also sing very well and is quite religious. in this movie she plays a fiery spitball girl who is very, VERY cynical about love due to her parent's divorce, her best friend's boyfriend randomly collapsing from a heart defect (look out gene), and her sister marrying some preppy dweeb with an overbearing mother. but then, then, enter some boy named macon (what the hell kind of name is that? seriously? where is that from?) with very overbearing eyebrows and her whole outlook on life is changed thru the course of a collage of images being flashed across the movie screen. seriously, the editing job? it was a joke.

this movie....well...it was terrible. but in a delightfully enjoyable way wherein i continually had to grope erica's leg while trying desperately not to snort while giggling.

#1 mandy ass moore is adorable. and makes lovely fashion statements all the time. she's like a little fashion plate of cuteness. such pretty skin and pouting lips.

#2 this macon character is a neanderthal. played by trent ford with little to no acting ability. he's not ugly though. and i guess that's all they were looking for. ahem in his bio section on imdb he says the following as a personal quote: "There are certain people you cherish really, really dearly. You want to rip your chest open and bleed warmth for them." which almost beats my favorite line of his from the movie, "i suck with words." a truly fascinating image.

#3 the best friend who gets pregnant by the deceased boyfriend is an interesting case because teen pregnancy is no joke and yet there was mandy ass moore encouraging it. plus the preggers girl said that she knew what she was giving up by keeping the kid. she knows what she's "giving up"? it's her whole future life, she has no fucking clue. sure she'll probably be a wonderful mother, but she can't know what she's giving up. not really. that pissed me off.

#5 the music. the music was interesting. in three instances primarily. first was at the funeral for the heart defect guy (this, let me stress, was a completely random occurrence where he just dropped dead suddenly with no warning. hella confusing.) anyway at his funeral they play his fave song which is "doooooo you realize....dooooo you realize you have the most beautiful face in the world...." which is kind of laughable at the time. since it ends up with mandy moore out in the rain by herself lifting up her face to the camera while holding the funeral hand-out which has the boyfriend's face prominently on it. but we are not looking at that, oh no, but at her beautiful face. to remind us that even though this boy has randomly died, he is not this movie's center and we should stop caring about him and look at mandy moore again and then whoosh edit cut to her dad's wedding. which introduces the second delightful lyrical accompaniment which is the donna's song, "you're the kind of guy who needs attention" which fits in well with her mid-life crisis wacky father who is a dj and marrying the leggy blonde traffic reporter from the station. lastly is the fact that liz phair's new single, which erica has complained about already, is included in this movie. which just goes to show even more that liz phair is a sell-out attempting a career rejuvenation by appealing to teenagers.

i enjoyed this movie. i didn't like it. i wouldn't recommend it. but i enjoyed watching it with erica. kisses. 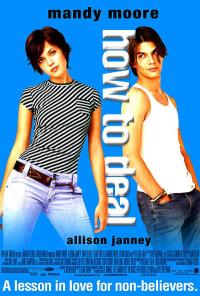 p.s. i love this poster. because it makes me scream out, "allison janney, what are you DOING?" and "a lesson in love for the non-believer"? tripe!

i wasn't able to stop myself from snorting that one time. remember? i do. probably so do the other two people in the theatre. that was so much fun. i want a fashion plate mandy-ass moore doll of my very own. except not a doll but just her. oh, man, i suck with words.