Sushi Movie Reviews
one girl. many movies. all reviews, all the time.
bad boys 2

this movie is offensive on many levels. but all the same it is very enjoyable. but possibly that is because i am like a slippery duck whose wet back is un-insulted by racial slurs (having nothing to do with my racial-ness anyway so i couldn't logically be offended in the first place) and homosexual taunts (to which i could be vaguely offended if i wanted to be, but am mostly willing to extemporize that it was all in good fun, joking wise).

i watched the original bad boys movie recently while i was up in oregon in prep for going to see this one. so i count myself as up on the little in-jokes between the two films. of which there are several. pretty much just between the two main male leads and their convos with one another. and they are funny, oh yes. will smith is way more funny though. just so we're clear.

they mention 9/11 in this movie. which startled me. i'm not sure why, other than the obvious that this is a very fictional place where even though a cop car can roll over and over and completely blow up--no cops ever DIED. fictional though, see, means that the advent of something wholly real is a little disconcerting to the viewer who is prepared for laughably ludicrous stunts and dialogue. there's a bullet-time sequence during the opening ku klux klan number when you actually get to watch the bullet enter some guy's neck and the blood comes out and everything. that is some sick (in a good way) shit. i fucking love bullet-time.

another thing that gave me pause was the number of instances where they say "shit" or "fuck" and the fact that the entire row in front of me was full of african american children under the age of 10 who would giggle wildly at the naughtiness of it all. who brings small children to such explicit films? is the fact that there's two role model type specimens of the race starring in this big blockbuster type thing which makes it feasible to expose your children to dirty language in order for them to see black men succeeding in some industry? because that just doesn't seem right.

there are three car chases in this movie. three. was one enough? i think so. the first one had the bad guys flinging cars for them to dodge, the second one had dead bodies falling out of a truck--none of which they managed to dodge, really the third chase was just gratuitous. and speaking of unnecessary, in the morgue there is a dead naked girl with big breasts. which we get to look at quite up-close. fer fuck's sake. it is the only naked breast scene in the movie. and they had to be dead? and jiggly? why? whyyyyy?

there's this scene where will smith and martin lawrence have a heart-to-heart moment which sounds very much like they're talking about their gay relationship and is supposed to be funny as a mis-heard thing. and it is funny. but it's also kind of insulting. although, will smith telling lawrence, "you can't say the word 'flacid' to me," is pretty funny. but some black woman saying to them later, "you two motherfuckers need jesus." as in "jesus" will save you from being "gay", or at least i think that's what they were trying to imply. that's not ok. also of the ku klux klan, "a bunch of men, hugging and kissing, that's some cult shit."

ahem, lastly, if i was a rat i might be insulted by this movie. but again, i am not a rat, so i am ok with this. they're pretending to be pest control guys to get into this one house (will smith, mind, is still wearing his HUGE diamond post earrings which probably cost thousands upon thousands of dollars) and lawrence is trying to convince this guy that the rats are merely worker bees and that they are "the explorers of the rat world. they're just looking for rat pussy." to which i was pretty amused. as were the small children in front of me. then he sees some rats having sex missionary style and is exclaiming to smith on their walkie talkies, "they fuck just like us!" in a revolted-fascinated voice. as if he's not sure whether to be pleased that they copy us or horrified that maybe we copied them.

for all of being 2.5 hours long, this movie is really good if you like explosions and buddy humor with both misogynistic and homosexual undertones. good times. i particularly enjoyed it because i snuck in for free after another film. free=good. 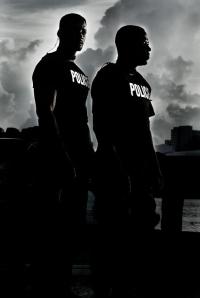