Sushi Movie Reviews
one girl. many movies. all reviews, all the time.
phone booth

i'm sorry but this movie--it kind of sucked.

she has a good point. only possibly we should change that to "speed 2: cruise control" since i LIKED speed. but phone booth and speed 2 have a lot more in common shitty shitty acting and plot wise.

i probably should have known what i was getting myself into when the movie started with an infomercial narrated by what's his name 24 guy (kiefer sutherland) about PHONE USAGE. plus the little pop up video windows everytime the man was on the goddamm phone....oooooooooggggghhhh frantic hair messing. it was bad. i am so glad i paid matinee price. 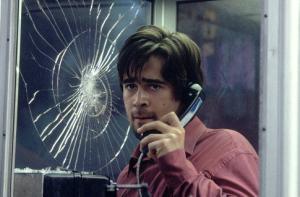 do you? well he sucks cock. i'm sorry. but there it is.

jason! i read the holes book and the main character is supposed to be FAT. not phat, but FAT. and i saw that preview he's SKINNY! gggrrrrrr......

I know! Pissed me off, too. God forbid they should let even the children's stories go un-eroticized.

they better not mess with zero because he is totally my fave rave character. besides the fact that he should be descended from egyptians, but i think they're just going to have his great-great-grandmother be a crazy new orleans type black woman. i am suspicious of what WILL still be the same. but i guess we'll be finding out come saturday.