Sushi Movie Reviews
one girl. many movies. all reviews, all the time.
shanghai knights

although the constant historical references could be annoying (charlie chaplin? you don't say! sherlock holmes? fascinating! knighting authur conan doyle and calling him arty? well i'll be!) the fight scenes were sweet! jackie chan i love you! i can't even begin to list all the cool kicking and punching and absurd background music, but some of my faves are: the umbrella fight scene and the umbrella dance to the music from singing in the rain with the cute little poses. and the sword fighting one and the hotel revolving door one. and the dunking owen wilson in the water one. and the chinese actress playing his sister kicked some fine booty too.

mindless (seriously) action movie. fun if you like either of the main two actors. or if your brain is the size of a turkey's. and the evil english guy is hot! (i throw that in there as a girl and as a bone to girls who are dragged to this movie by boys.) 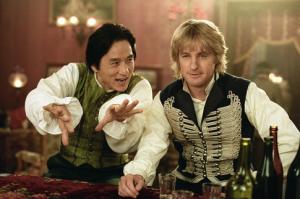 ha ha ha! owen wilson stunt double in the background there. cause he don't do his own apparently.