Sushi Movie Reviews
one girl. many movies. all reviews, all the time.
confessions of a dangerous mind

this movie was kind of not what i was expecting. having seen the trailers, read the book, and been very, very excited i was a little let-down by george clooney's directorial ambitions. he's not a very good editor. basically the thing that was wrong with this movie was the little snippet conversations with the "real" people. totally unecessary. it was obvious that he was trying to provide the movie with validity as the opening little announcement of, "this movie is based on the true journals and tapes and so on of chuck barris" kick-started the whole debacle. but it didn't need to be pummeled like that. the "interview" scenes did nothing to advance the overall production value. they were just wasted space.

on the other hand, sam rockwell was amazing. and good old george's death scene was visually mesmerizing though also slightly mystifying. and completely at odds with how byrd dies in the book. which leads me to the other point. the diversions from barris' own autobiography were astounding. now i know that he wrote more books and that they could have been drawing on other sources of information that i know nothing about but still. STILL. so many things completely different. fucking amazing.

but it's good. it's interesting. i'd really recommend the book too though because it was a fantastic read. 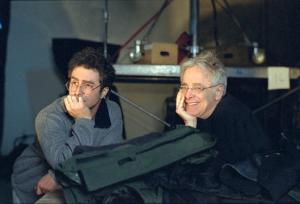