Sushi Movie Reviews
one girl. many movies. all reviews, all the time.
the two towers

midnight premiere. super-fiend fanatics all around. it's the best way to see these things. now then what can i say?... seriously do not continue reading this if you don't want spoilers, ok? 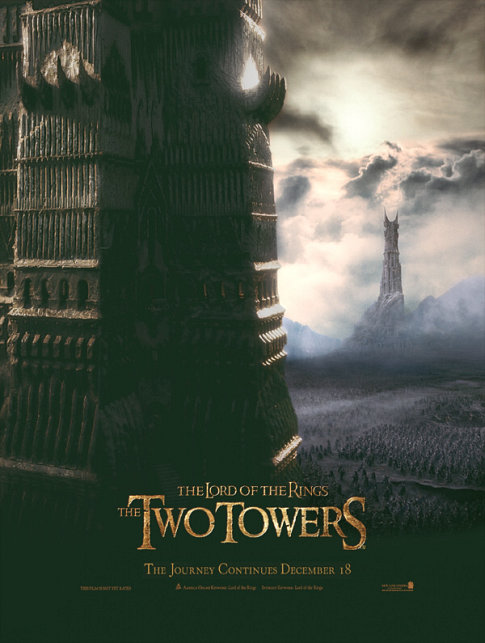 #1 bad things. (to get them out of the way.)
tedious fight scenes.

it was just like the boring-ness which is reading the middle book. well really all of the books. isn't that fucking sad? i mean...maybe this is a good point to the die-hard fans who will be pissed at all the other liberties taken by this second movie. but maybe they would just be bored too. but maybe al the fighting scenes will call to mind things like world war II and freedom and liberty and things that tolkein was actually concerned about at the time. or maybe they'll just be lots of headless things and ladders being flung and urukhai being all groany and hollery and really kind of funny in a hackneyed embarrassing sort of attempt at horror on what looked like a low budget at times. cheese dood. cheese.

it was like....the first one was GOOD, right? like...it was serious and magical and real and true. and this second one is more....cheese. like....serious cheese. as if they couldn't quite hold together their subject matter and they became too interested in playing up certain characters to the detriment of others (ie unintentional humor employed by golum, intentional though...sometimes misplaced humor by sam, aragorn, gimli) as opposed to the seriousness of the quest and the battle for middle-earth. (don't get me wrong i fucking enjoyed the humor, i'm just saying it didn't quite fit in.) mainly what it did was bring the movie down to being a...parody sort of. a parody of tolkien's work. like they thought, "now we have established ourselves with FOTR, now we can putz around a little and enjoy ourselves and have choppy editing and make some crude jokes and have some laughs at the expense of following up a really good movie with a not so good movie." a damn shame is what it was.

the ents were too physically short (kristen pointed this one out as a flaw. but maybe it's more of a personal vision flaw than a real flaw, because otherwise the ents were pretty great. well...ok i thought they would be fatter too. and maybe speak slower. and...have more screen time. but they were pretty boring when not stepping on evil minions so whatever.)

frodo and the ring (the main fucking character here people--the ring, not frodo. fuck frodo, cute though he may be. fucking hobbit. practically a midget.) was in the movie about maybe a total of 30 minutes. that's kind of unacceptable. following the plot of the horse-lords, all well and good. the fucking touchy-feely bullshit with those 2 kids and their mom? totally unnecessary. i mean, they wanted me to be all in touch with their spirit or her maternal instinct or something but really i was just like, "who the fuck cares!? get off the screen!" maybe those ones were HIS (peter jackson) kids? i know they were both in there somewhere. their fighting tactics in the helm's deep battle sequence? equally shitty. i mean, maybe that was in the books too and maybe i've forgotten how horribly they fought, but still. did they need to wait that long to shoot arrows? no. did they need to be such wussies about pushing the ladders off? no. did they need to have only like 15 people left at the very end out of the hundreds they started out with? no. it was silly. and the lack of what's her name fighting? what's up with that? she was supposed to fight some i thought. although i don't think she did in the book....not yet at any rate.

not that i can pinpoint all that many examples but it seemed as if the liberties taken in this movie was far more gross than anything done in the first one. they cut out tons of shit, which fine, they had to make it shorter. and they added the stuff with arwen, which yeah is culled from the appendix/short story tolkien wrote about their doomed love, so fine whatever. but there was a lot of ent stuff cut out. and a lot of faramir stuff cut out. and some of the things they did with aragorn (fell off the cliff? did that really happen?) seemed faked.

but let's be the honest the spirit of the books is still primarily maintained. and on to the good things.

fucking schizophrenic golum was BRILLIANT. at first i was like, "ah man. stupid cg effects. shitty face with those big eyeballs all gross and the comb over and ew butt crack." but then later on when he does the first major scene by himself where he talks to the evil golum and says, "goes away and never comes back!" and the little face saying, "no." and the bad face saying, "kills them! tricksy!" "master is our friends." oh man. shit he was awesome. and it's sad, as kristen commented, that the cg character stole the fucking show. but you know what, he was just GOOD. the acting was seamless. and the facial expressions grow on you like a foot disease blanket. splendid.

the boys were in fine form with their little jokes and their battle counts and legolas got all the good special effect moves, the jumping on the horse while it was running, the sliding down a stairway on a shield while shooting like 10 urukhai. he was amazing. now if only he didn't have that hair.... aragorn's sly smile was a sight to see after the aloof unapproachable he played in the first one. apparently the human love interest is good to him. though i still like arwen a damn lot.

gandalf seemed sadly lacking in the screen time, but acquitted himself well whenever he was there.

watching ents squish people and bang their heads together and kick them like footballs was fun.

elijah wood's acting, i thought, was GREAT. but i know not everybody thinks that.

the sweeping vista scenes are still gorgeous, though getting a little old at this point and tiresome like the walking. oh man i slipped back into bad. so i think it's time to conclude.

the two towers is not as good, in my opinion, as the fellowship. i have high hopes though that the return of the king will out surpass them both. since really let's be honest the only actually good part about reading the books is the last 15 pages of the third one and you know what that means...the third movie will have the best last hour out of all three. i am impatient to see more of gondor, more of frodo, more of mordor, more of legolas, more of golum, and more of osgiliath. i think that the two towers is GOOD. technically it doesn't seem as proficient, the propensity for battle scenes in place of more story was disappointing, but overall it's good. the humor moments offset the darkness well. the acting is superb on all parts, (although gimli was a little overplayed at times.) i will probably see it at least one more time while it's in the theatres. and i am soooo happy that i went and saw it at midnight because it's always so much fun to see it first. and it made me all happy and now we shall see how long that happiness last. i give myself till about 7pm before i pass out. =)

picture of merry and pippin at the premiere. ha ha!

I think the main reason this one was less good was the same flaw the book had - the fellowship was broken so you have to run around following different storylines. That was viable in the book when you could spend a long time in one story, but in the movie it came out sort of choppy.

The battle scenes were poorly cut. Aragorn's head is too small and he looks like an aspiring rockstar and not a king. legolas bothered me all through because he seemed unnecessary (I had this problem with him in the books too, though). Making the dwarf comic relief seemed way too obvious and made me sad because I think he was more dignified and fierce in the books.

hello mr. bloom indeed! (why am i commenting right now? why???)

why WERE you commenting right then? didn't you have better things to be doing?