Sushi Movie Reviews
one girl. many movies. all reviews, all the time.
fruits basket

this weekend...,well just sunday, i watched an entire anime series called fruits basket. yes. fruits basket. not sure why. well i know why it's called that (and trust me the reason is perhaps dumber than the name itself), i am not, however, sure why i watched 26 episodes in one fucking day. or why near the end i started talking to myself, the cat, the television. exhaustion. lack of food. lack of sleep. it wasn't pretty. what WAS pretty were the anime boys. ha! you knew i was going to get to them and my new fervent crushes on each one of the little emotionally scarred 2-d cuties. cutiiieesss.... 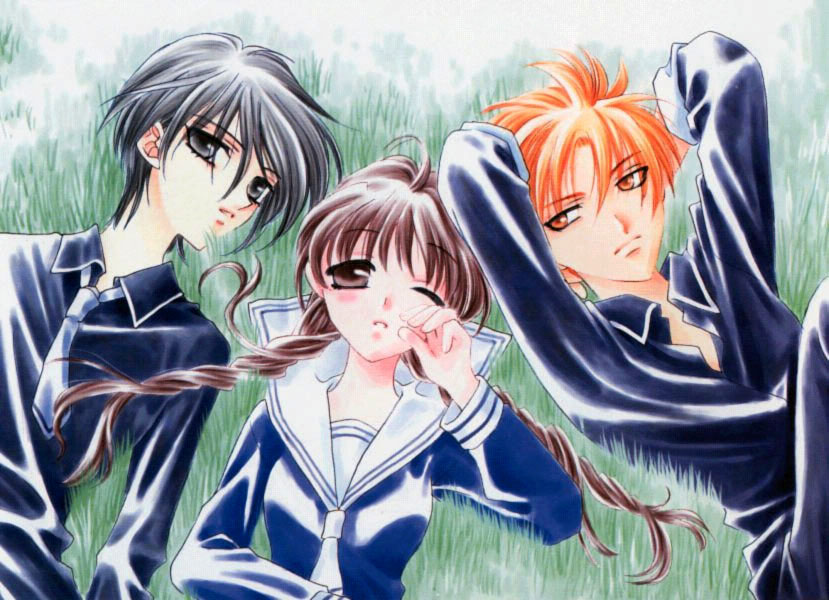 it was all in all a relatively good show actually. i mean. the plot was well thought out. oh god. i just said that. let me explain something here. the plot was based around this household of three men who, when they are hugged by a girl, turn into one of the 12 animals of the zodiac calender. you can imagine the amount of times the girl had to accidentally trip in order to provide some humorous gag moments. because of course it was a secret from other people. and they would have to cover up really quickly the fact that there was a pile of clothes on the floor and a mouse running across the parquet.

the girl was kind of dim really but always had these holy moments where she would impart some sage wisdom and the males would begin to accept themselves instead of loathing their demon zodiac curse. there were girls cursed too and they had to hug boys to turn. there was a moment with the mailman... anyway. but basically it was a semi-love triangle (undeclared and undecisive) between the main (non-cursed) girl and two of the cursed boys. it was cute. it was sweet. sometimes sappily. but still. and i enjoyed it, i did.

the artwork was standard, though they did some interpsersions of rough sketches which were interesting along with some tv wave patterns every so often to give mystical height or notice. and once there was a scene where there was a train with real people getting off and 4 anime characters in their midst which looked cool. and althogh i know this makes me a dork. in a couple of episodes there were moments when the animation continuity was imterrupted by a misplaced cell. so there would be a fraction of a second where a different image would flash by and with the technological wonder of dvd i could pause fast forward to check and look at how the image was moved slightly to the left so that part of the previous cell was included on one side and the new one on the majority of the screen creating a juxtaposition that lurked at the corners of the eye if you were watching normal speed very closely. in one of these. the characters switched sides entirely and there was this fucking scary shadow figure in the trees on the right side. i stopped pause ffwarding after that.

the reason i found this wacky series in the first place was because i was searching on news of the licensing of 'one piece' (jacob). they are both distributed by the same company (funimation. cause it's so fun.) and although one piece isn't out yet, soon maybe. i know you wanted to see more of it. wacky stretchy pirates. i also got all of FLCL which maybe i will watch today. (it's only 6 episodes.) but i am so fucking excited. it's by GAINAX who did neon genesis evangelion and also kare kano. both exceptional artwork and story. and FLCL is fucking brilliant and frenetic. (or at least the first 4 episodes which i have seen are.) 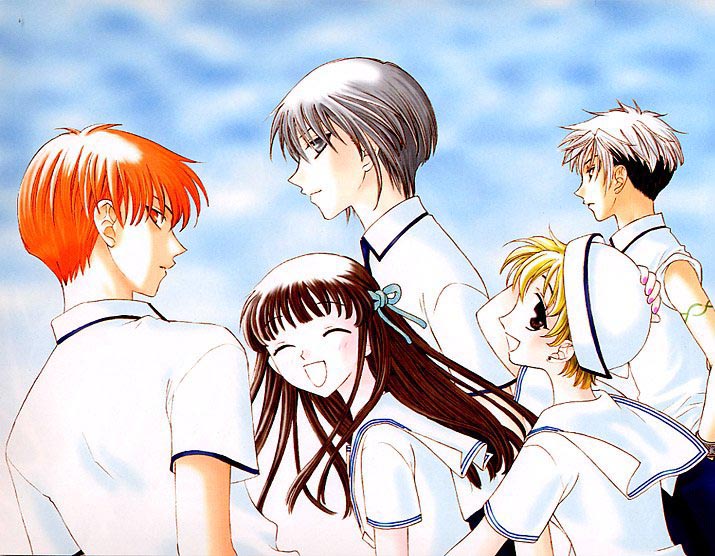 all I can say to this is my most annoying phrase.

Fruits Basket is a very funny touching and loving story. Honda Thoru is me while Kyou is my boyfriend.

WHAT? Kyou is MY boyfriend. I do not know who you are, but you better stop dating my boyfriend. Or I will have to go CRAZY on him. And on anyone who is dating him. Anyone else but me I mean.

dear kevin,
we are all seriously messed up in the head. mostly we just have inside anime jokes for no good reason. except for maya who i don't know. but she seemed nice. do you like fruits basket? thanks to your commenting here and me remembering fruits basket i think i might have to watch it again. kawaiiiiiiiii.

I love Yuki and Tohru!
They're the best!
Momiji, Kisa, and Haru are aswesome!
Hiro, Kyo, and Kagura are cool!
Aya, 'Gure, and Ritsu are funny!
'Tori is pretty cool too!

I'm not too fond of the other two Juuninshi!
Akito creeps me out!

The show is AWESOME!!!!!
But to those of you out who believe it is appealing to have that much romance in one anime your an idiot:( The best parts have to be when they fight (go Yuke!!!) Though I find it pethetic that kyo can't even beat Kagura, I mean how low can one person get. Though I do think all the characters are really great (and the artwork rocks;)And if i did have to pick a character it wouyld have to be Hatsu haru because he also does the voice of Yuske on YuYu Hakusho( You are awsome!)

momiji= me the cutest member hehehe!!!!!!

omfg!! fruits basket is SUCH a good anime show...and I absolutely LUVED the dubbs...they were AWESOME!! I couldn't get over the last episode though...I would definetly say that that show has become one of my top fav anime shows!! ^_^ i bought the box set and all, but they said that there were 7 un-cut episodes...some1 help me out here, LoL. btw, this is all new to me. there's actually a movie!?! some1 pinch me! LoL, Jk. um...I'll talk to y'all later, ciao! *Magz*

I HAVE THE BOX SET AND LOVE EVERY EPISODE!!!OH,AND KYO IS SOOOOO CUTE!!!

hahahahahhahahaha i uno why i came here but i like fruits basket, so what can i sai?>. i like haru, then hyo, then yuki, then um, tha grown up momiji, then tha youger shigure, then the younger hatori hahahahahahaha i kinda like the pictures, e-mail me! ^^- no

HEY! you cant have kyo all to yourself up there! your not the only one who actually likes him! gosh, and you the one who said that kyo sucks at fighting, he cant beat kagoura, because he doesnt want to hurt her, do you even pay attention?! how come every body is saying that kyo is their boyfriend, i mean notto sai he isnt cute, or ne thing, well, i like tha show >.

hi I really really like fruit basket especially kyo he's so cute and cuddly, by the way does anyone of you people here knows who is Tohru's real prince Charming??!! is it Kyo or Yuki?! please respond immediately because I'm getting crazy here!!!!

Kyou-kun is sooooooo HOT!!!!!!!!!!!!
But then there's also Hatori,Shigure,Yuki and Hatsuharu!!!!
The books and movies are such big teases!!!
Why can't the guys be real?! :(
My friend has a monster crush on Haru so now her fave animal is the Ox although in the books and movies he looks like a cow!

Kyou-kun is sooooooo HOT!!!!!!!!!!!!
But then there's also Hatori,Shigure,Yuki and Hatsuharu!!!!
The books and movies are such big teases!!!
Why can't the guys be real?! :(
My friend has a monster crush on Haru so now her fave animal is the Ox although in the books and movies he looks like a cow!

For the next time put more photos of anime, but the site is not that bad. But I now that the men or women can do better than that. So well done !!

GOOD LUCK FOR THE NEXT TIME!!!

GOOD LUCK FOR THE NEXT TIME!!!

they look great together