lovely and amazing" />
Sushi Movie Reviews
one girl. many movies. all reviews, all the time.
CQ

so i just watched CQ, roman coppola's directorial debut. it's really good. the thing that is the most amazing about it, is the combination of two different movies that are being made within the fim itself. there's the dragonfly movie, and there's paul's movie 69/70. the methodology of 60's camp sci-fi and new wave french cinema in order to illustrate the complexities of film-making in general is well done. the editing is flawless, and the multiple storylines are well orchestrated in order to produce a seamless whole.

you know how you can rave about the beauty and stylistic purity of the virgin suicides by sofia? well in a different way you can say the same kinds of things about her brother's movie. it amazes me how a brother and sister can make movies that are so obviously drawing from the same kind of background in film appreciation while at the same time produce two completely disparate movies.

jeremy davies ability to look introspective and act quietly is the perfect foil to the over the top allure of angela lindvall as dragonfly and billy zane as mr. e. not to mention depardieu, schwartzman, massimo ghini, and giancarlo giannini. angela lindvall's transformations from dragonfly the seductress to valentine the earthy sweet hippie is also impressive for a model turned actress in her first movie. although if you watch the dragonfly alternate version of paul's with her commentary she is so godawful juvenile. but apparently she had a baby boy last february. how scary is that? i don't think 22/23 year olds should be having babies when they themselves still speak like 2nd graders.

the special features on the dvd are wide-ranging. there's video documentaries by sofia, his mom, and some other filmmakers. there's a commentary, there's a live music concert of mellow (speaking of which air is WAY better than mellow, but they're both kind of the same thing. another point in the sibling connection i think.) there's like 5 featurettes too which were fun to watch.

i put it on my amazon wishlist, yes i liked it that much. =) 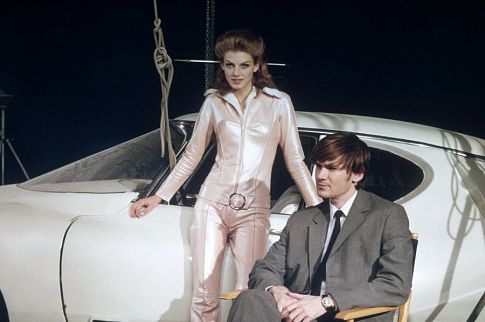