Sushi Movie Reviews
one girl. many movies. all reviews, all the time.
the covenant

you know what's wonderful about nuala being in town? being able to go see horrible, truly horrible, YA fantasy movies with someone else.

the covenant is about teenage male witches. hot male witches. with bad lines. and speedos. really quite good looking though. they're all seniors at some private prep school on the east coast and descended from witches that went into hiding during the salem witch trials. at the age of 13 they get some wicked awesome powers. and at the age of 18 they "ascend" to full powers and then start dying. because the powers are their life force, and oh so seductive. everytime you use them you die a little on the inside. and every time you use them you want to use them more. as a premise goes...this one was pretty lame.

it became lamer as they didn't have the intelligence to use the powers to full potential. moreover they constantly drove around in the rain with the top down on the car. and every time the girls were alone in their dorm room, they stripped down to tiny tank tops and underwear. i know this is male wish fulfillment, but girls don't really do that. especially when it's freezing. they're called fuzzy warm pajama pants, people, learn it, live it, wear it.

there were some horrific moments with spiders where nuala and i cringed and squealed in our seats. they did the laying eggs, baby spiders erupting from a sore thing. oh god, it was awful.

as he drove the car over a cliff and used his powers to levitate it in concert with the other three hotties.

chase: "how about i make you my wiotch?" 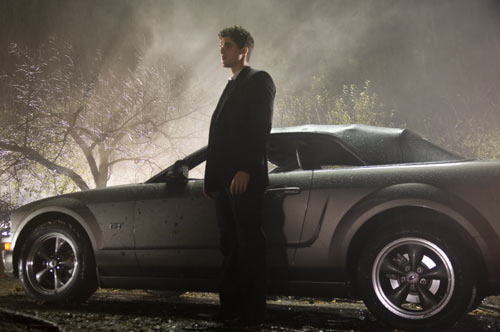 NO!! I'm so so excited! I love that the whole movie is an ad for Ford Mustang and an excuse to get hot young things to parade around in almost no clothing! Hah!