Sushi Movie Reviews
one girl. many movies. all reviews, all the time.
stick it

from the arty-farty world of international film festivals to the brightly candy-colored, teeny-bopper thrill of 'stick it'--gymastics' answer to the cheerleading delight of 'bring it on'. this is me, living on the raggedy edge. it's by the same writer as 'bring it on'. also 'aquamarine'. stupid mermaid movie.

'stick it' (that link comes with music) is amazingly obnoxious, colorful, slangy, and an utter delight. there's no real message--other than to be disobediant--but there is a never-ending series of amusing one-liners. one of these is the movie's un-motto: "I wasn't great, I was obediant." said by the main girl. and, hoo boy, she is no longer playing nice. instead, she's torturing me with voice-overs.

plot: (is this really important?) girl abandons world championships during the floor routine and becomes the most hated gymnast in the world. time passes and she's now a delinquent kid trashing newly constructed houses while riding her bike in swimming pools. the judge offers her two choices: texas military academy or the VGA. VGA is vickerman's gymnastics association, a boarding school for gymnasts. her mother's horror at this option is palpable. and laughable since she can't act worth shit. judge makes her go to VGA. she goes and is very rude, annoying, has horrid voice-over moments, finally gives into fate and starts training for some upcoming competition. walks out on competition. yes, she's just that stupid. goes back again, trains for nationals, and then they go to nationals. 4 girls from VGA, which is a record for jeff bridges' crap gymnast boarding school. they get really pissed at the judges for deducting points from one girl's routine because her bra strap showed. so they all start defaulting to prove that instead of the judges' stupid rules, the gymnasts can pick the best competitors. an interesting conceit and not without merit. girl power! rock on, my sistas!

seriously, the angry girl power of this movie is really quite appealing. i even teared up in one part. it was embarrassing. i also kind of liked some of the soundtrack of this too.

some good quotes:
"Why you always got to bite my moment? Taste good?"
"The 'I hate you sandwich'. Meet the bread."
"What country are they going to represent? State of delusion?"
"I'm so Sure, I'm practically deoderant."
"I've totally earned my spot, I'm practically a dalmation."
"Too much rock for one hand, baby."
"It's not called 'gym-nice-tics'."
"Call me." "Stalk you."
"Dude, what's so bad about being whipped? When is that a bad thing--ever?" 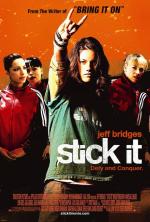 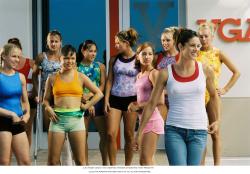 I can't believe you saw this without me. How could you not tell me you were going? How will I see it now?

I practically teared up reading the word "gym-nice-tics".

But I don't really want to see it.