Sushi Movie Reviews
one girl. many movies. all reviews, all the time.
the league of extraordinary gentleman

i kind of wish i hadn't seen this movie. except for how i went to a matinee and didn't have to pay for my own ticket. so really i just wasted time of my life. and it wasn't a complete drag i guess. just mostly.

this movie is kind of cool with all the literary figures and the completely inappropriate items in the time period setting and the complete suspension of reality (does the invisible man walk around in the mongolian arctic wastelands while it's snowing completely naked and not get frostbite? yes, he does. and boy was i ever mad about it.)

other things i didn't like:
in the previews the one woman on the team says that line, "and women" when someone says, "oh-ho-ho so this is the league of extraordinary gentleman." (or something to that effect). in the movie itself though, i'm pretty sure she never says that. am i wrong? i can't remember now but i am pretty sure it didn't happen. which is irritating because you think, 'oh they're going to provide some semblance of feminism to this rudely titled movie.' but then, it just doesn't happen and then also the one female character is the only one who kills violently and for the fun of it. also the one who gets her emotions involved in the plot. even the whole father-son dichotomy between allan quartermain and tom sawyer (yes, tom sawyer) isn't emotion filled or touching. it's just male bonding of the manly kind.

speaking of the tom sawyer character played by shane west from multiple teeny bopper movies including mandy ass moore's film debut. i heard they added him as a character because they wanted to have a draw for the pre-teen american bitches. the marketing people or whoever, producers, i don't know, they thought that adding tom sawyer would bring in the male crowd and then that shane west would bring in the female one. they're probably correct in this assumption, but i think it's sick and wrong to add something like that to a british based idea just to appease the americans and the creators' pocketbooks. heh.

this next part is written in black and needs to be highlighted because it completely gives away the ending and i am being polite by letting you choose to read it, (editor's note. i changed it a little so it doesn't give away as much since jacob said he could see it anyway and so now i feel bad. my point is still clear, but the whole truth has been deleted a little). at the end of the movie, tom sawyer and allan quartermain are having this little heart to heart in which quartermain says, "may the new century be yours, boy, as the old one was mine." the camera has kind of panned out or something and you can take note at this point that sawyer is standing straddling a crack in the floor. which is all very symbolic and well and good, and normally i might be pleased by it. but in the tripe which this movie produced in my spleen, i mostly just found it tacky and out of place.

x=ab^2 favorite character:
dorian gray. and that's not just because i love oscar wilde more than bram stoker or robert louis stevenson or mark twain or what have you. all right, it sort of is.

sean connery...i love him, i do. but i think he's a little too old to play this role. how depressing is that. power to you, connery. keep on trucking. 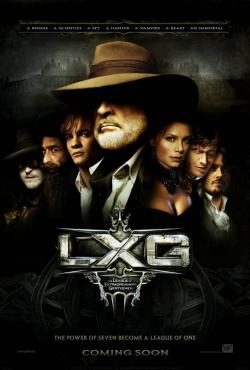 Your spoiler isn't actually obfuscated. It's black on grey, which makes it stand out from the rest of the text, thereby guaranteeing that people read it.

PS - what in appropriate items? Nemo's supposed to be a fantastic inventor, so if it's anything technology relate....

what? on my computer it's black on black. crap monkeys. well i tried.

ummm....welll.....if he's an inventor...but just everything. they had lots of cars and submarines and guns and gizmos. but maybe (seeing as how i am no expert) they had all those things in whatever time period they were pretending to be in. but no, no, either way it was illogical with the LITERARY CHARACTERS. this is not reality based. and even though normally i am ok with that, i just wasn't here ok with it for some reason and then got picky and tried to say, hey they can't have this submarine with its weird turkish/indian elements. what nationality is nemo supposed to BE anyway?

you should just go see it jacob. you know you want to.

The League of Extraordinary Gentleman is based in a fabulous comic writen by Alan Moore. I sugest that if you want the real thing and not a teen summer blockbuster with a lot of "bladesque" action scenes read the book.

That Tom Sawyer was the usual and stupid idea that hollywood movies must have an american hero. Alan Moore must be very sad to see a char like to damage the european (most british) circle of victorean heroes. Dorian Gray also is an "forced" char to give romance to the film. He is not in the original comic book (not in the first series at least).

Neverthless the comic book is not exagerated in char powers like the movie... it have an brilliant victorean athmosphere and the plot it's very well designed. don't lives of fight but of a clever plot.

Please give a try to the comic book. forget the movie...

I agree that the comic was pretty good....but I'm not sure I'd call it "fabulous". The atmosphere was great: a height-of-the-industrial area Victorian slumming. But somehow, I expected more in the way of story. It felt like the bulk of the series was devoted to, "Look! We've put this literary figure in our book! Isn't that cool?" So there was a decent amount of character development, but some of it was just shock treatment. Nemo's character seemed to be the major exception, though, as he was fleshed out quite well.

Of course, the comic WAS modeling itself after a Victorian era pulp picture book, so the lack of depth in that respect may have been an emulation of that.

I'm really hoping that the second series (which I haven't read yet) spend a bit more time on making the characters more complex, now that they've been introduced to us.

PS - while Dorian Gray isn't an active character in the first trade paperback, he's referenced as having been part of the League at one point.

I liked the comic, but I didn't really expect the movie to be faithful to it, especially when it's rated PG-13. I'm not really sure why they thought the whole concept would translate well anyway, since the book seems to get a lot of its value from dry and/or black humor, and the whole Victorian-pulp-novel-parody element. Plus, it's really gory.

The movie sucks not because of a lack of faithfulness to the comic, but rather because it doesn't make any sense. Action movies and superhero movies are interesting when they put somer sort of limitations or rules on their fantastic characters; e.g., Superman is vulnerable to Kryptonite, Morpheus and Trinity can kick ass but not against agents, blah blah. Action sequences need to make sense, with clearly defined limits, or at least goals.

In LXG, you can't really tell what anyone's abilities, strengths or weaknesses are. The vampire girl, Tom Sawyer, Invisible Man - it's not really clear what they can or can't do. And during the action sequence,s I don't know if the director even knew what was going on - the plan to save Venice (?) is based on some random guy in the crowd yelling, "The buildings are falling like dominoes!" because somehow a random Venetian dude in the crowd is the key to analyzing the villainous plan.

For the book's character, Connery is too young. For the movie, he's too old.

Regardless of one's feelings toward the comic, the movie achieves a high level of suckitude purely on its own merits.

Dude! This movie kickes major ass! I would reccomend it to anyone who like awsome movies!