Sushi Movie Reviews
one girl. many movies. all reviews, all the time.
8 mile 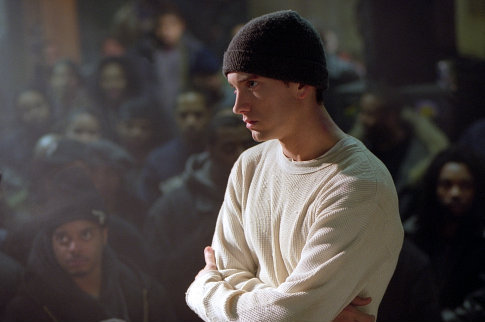 this entire movie i was sitting there panicking over eminem. like i was honestly WORRIED about him. it was amazing. i mean...let's be honest here i'm not the hugest fan. i don't own any cd's. i don't listen to rap anyway. but that boy can act. holy shit. and the amazing thing about it was that at times you wondered if it was acting or if it was him. what with all the real-life type connections they were trying to draw. it was wierd. what got to me was how....hurt he always looked. and hopeful and afraid of rejection, terribly afraid. and i was so scared that he would be rejected and i was so nervous when he had to do the battle things that he would lose or choke up again. i was curious if his fear in the movie was fear of the what his character was going through or what he in real-life would go thru when this movie came out. does he live in a state of trepidition more than one would reasonably assume if all one knew was his lyrics? or do his lyrics reflect this too? i wouldn't know not really having made a study of them.

my point, i guess, is that 8 mile was really good. HE was really really good. and even if you don't like him, maybe you should see it because it's hard at least not to feel something for him while watching this.

and britney murphy's really good too and kim basinger. and the little girl that played his sister (?).

i haven't seen it yet but i will. and why? because i have been thinking about him for three days straight. not in a celebrity fantasy way but just in a back of the head idle way. all the time. for three days. for no reason.

that is wierd. maybe there's subliminal messages in something you saw. maybe you've beeb eminem brainwashed. why don't you rap a little for us, didorapper?

well you know i hated his whole first album. HATED it. but i like the new song. he's catchy when he's not talking about killing his own mother.

yaar i am going to see it on thursday.

and you know he is kind of cutie patootie.

yar he kind of reminds me of my brother and matty j. and...yeah...

...are you saying you are attracted to your brother?

hwee no. i'm saying he reminded me of him a little sometimes.

HI I LOOOOOOOOOOOOOOOOOOVE YOU VERY VERY LOVE I M SO HAPPY BECAUSE I TELL YOU ..........BAY
MY E-MAIL : BIG_GUYI88@YAHOO.COM BLEASE TELL ME

Hola, I am called esteban ... and I want to say to them that eminem this one treading on shit ... I want to tread on shit they are, this way that I go away to putting to rapear to manage to be "almost like eminem ... thank you

I am inviting to www.eminem.vel.pl
Poland Page about Eminem

hey you guess what i think you are so damn hot and my hole room is covered in you. I always listen to your songs everyday all the time and i watch your movie 8 mile all the time to. You have a nice dang body. You look damn good. well g2g holla. love your biggest fan Brandi Matchett.