Sushi Movie Reviews
one girl. many movies. all reviews, all the time.
The Good Girl

man, i always want to have more time to write these things and i never actually do. sucks ass. let me just say for now that this movie was, i thought, really good. and not just because jake gyllanhaal was in it, although that was definately a plus. i thought some of the camera work was interesting. particularly this was evident in the packing scene when all of a sudden they switched to a hand held camcorder to film jennifer aniston's hasty packing and unsettled state of mind. parts of the end i felt were wholly unecessary. and jennifer aniston's complete corruption of a texan accent and frequent slippage away from even faking it was kind of awful. but on the whole i really thought this movie was a good job. it's portrayal of small time life and the overbearing sameness of it was presented really well. some of the writing was exceptional--the ironic twist of phrase and occasional quick flinging of the come back or the softly muttered expressions of dismay and disgust with life. or even jake's constant outbursts about people not getting him. while at work he is surrounded by powder puff girl iconography.

my fave rave part of the movie:
in the car when jake has just seen jennifer sleeping with bobo (hwee he was so good!) and she tells him to calm down:

"i can't calm down! maybe if i was a slut like you and could calm down all over town, but i'm not!" 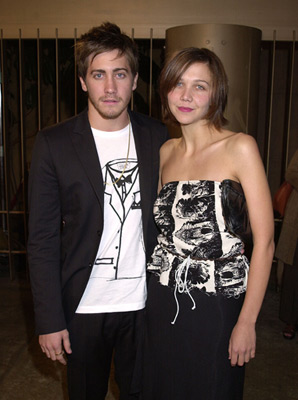 baby, you can calm down all over me anytime. shit, he's sex-bomb.

p.s. that's his sister maggie
whose movie secretary will soon be out. hoo boy. wanna see that.

p.p.s. let me just say that i hate macintoshes and i did all of this earlier at work or at least tried to and it was being all fucked up and now i am still awake and working on it at home and i want to be in bed! whine whine whine!